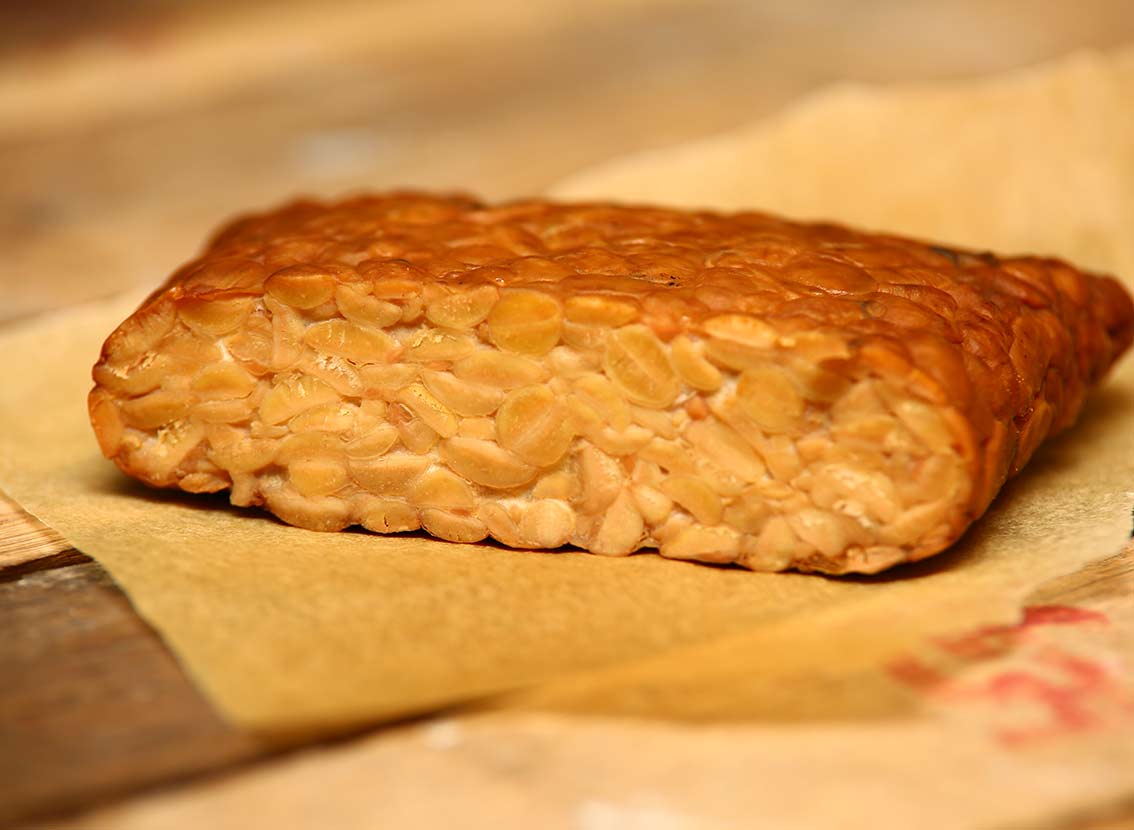 "Moldy" soy has won the heart of many food lovers. Not only vegetarians and vegans love tempeh. This traditional ingredient of Indonesian cuisine diversifies and enriches the diet of anyone who is open to new flavours.

There is nothing unusual in eating fermented soybeans- a tempeh. At the end, the world is eating "bad food" - we have mould cheese, Eastern Europe – sauerkraut, żurek- a traditional Polish soup made from fermented rye or pickled cucumbers, Korea is famous for a kimchi. There are many similar examples.

Tempeh is a high-protein substitute of meat and dairy products, produced by fermentation of soybeans. Tempeh probably was "invented" on Java island, in Indonesia almost 2000 years ago.

How is tempeh produced? Beans are cooked, preferably steamed. Then the fungus from Mucorales (pin molds) order - Rhizopus oligosporus is added. The spores can be purchased in the form of special starters that are added to cooked soybeans. The next stage of tempeh production is its incubation at 30-42°C, lasting from 24 to 36 hours. After this time, tempeh is ready for consumption.

Ready tempeh looks like ... a nougat and it has nut - mushroom flavour. You can prepare it in many different ways – it can be baked, fried, smoked, marinated, added to vegetable dishes, soups and salads. It is perfect for vegan burgers!

Due to its high protein content and specific texture and flavour, tempeh is loved by vegetarians and vegans. The amino acid profile of the protein is very similar to meat. Thanks to fermentation process is more easily digested by the body than products with unfermented soybeans, and nutrients can be better absorbed. Additionally- if digestibility and assimilability are taken into consideration, tempeh wins with beef, plus - it does not contain cholesterol. Tempeh is rich in iron, calcium, magnesium, folic acid and B group vitamins. It has a very low glycemic index which equals to 5.

There are so many ideas for preparing tempeh, there is no time to use them all. I will focus on one, taken from the excellent cookbook Jadłonomia by Marta Dymek. According to her recipe, a fried tempeh is aromatic, it has a distinctive taste and thus it can be loved by even the most hardened carnivore. Tempeh prepared in this way will be good as a sandwich, but it can also be the star of the evening when served with salads only.

Shred chilli. Mix marinade ingredients. Cut tempeh into half-centimetre slices and put in a container for storing food. Pour the marinade and put a cover. Leave it for at least an hour. From time to time shake the box to make marinade cover the entire tempeh. Fry the marinated tempeh in hot oil for 1-2 minutes on each side. At the end, pour the remaining marinade into the pan and fry over high heat until the liquid will be reduced. Thanks to it,the marinade will caramelise on tempeh slices, which undoubtedly raises the taste of the dish.

The best recommendation for this dish is that during testing a carnivore, I have heard that tempeh prepared in this way tastes like... a fried bacon! In the book Jadłonomia by Marta Dymek you can find more ingenious recipes to use tempeh.

The linseed or the flaxseed is a product of the great nourishment and the strong healing value. Known from ages, it was very much appreciated by our grandmothers and definitel...

Do you remember from your childhood the treatment with pine shoot syrup? Its tasty and effective alternative to syrups from the chemists. If you want to prepare it – it the la...

Nettle curse of the past, hope of the future

Curse of the past and the time when you learn how to ride a bike. A short adventure with it often ended up with burining pain. We avoid nettles like the plague, but it is a so...