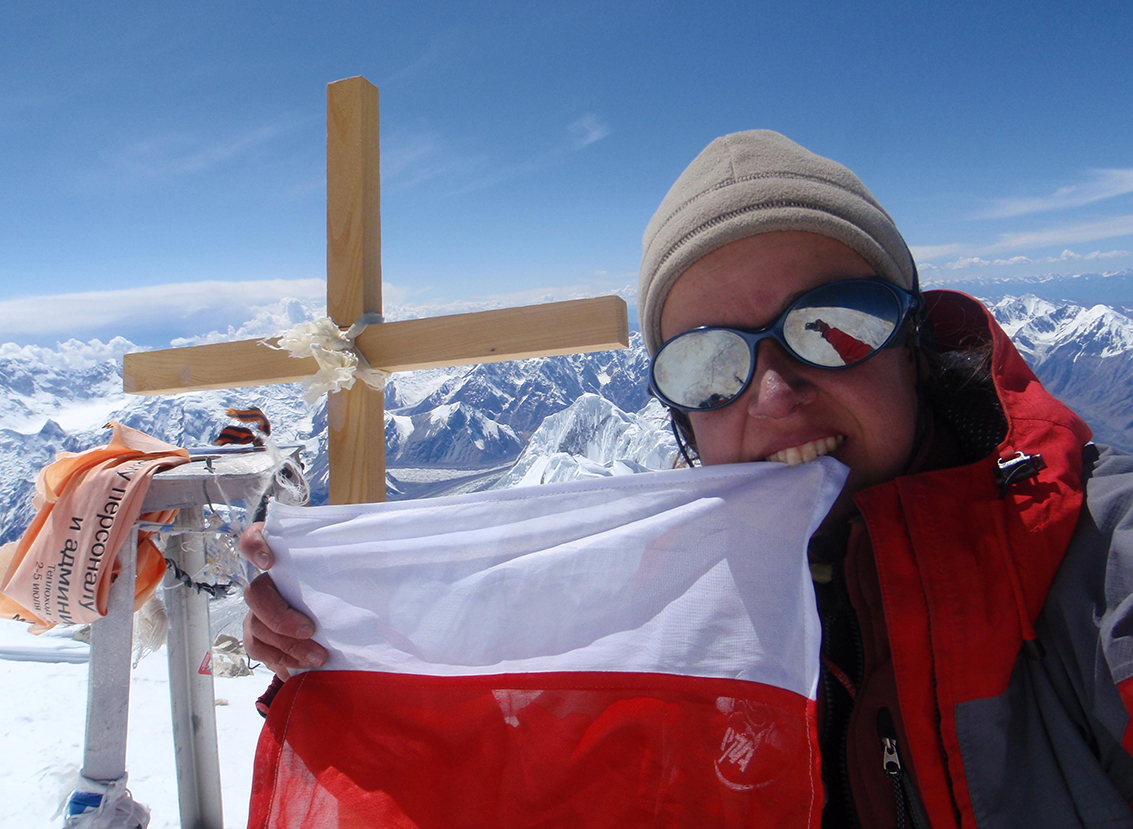 She has graduated from psychology and sociology at The Silesian University in Katowice and currently she is about to finish her PhD studies at The Jagiellonian University, Krakow. Professionally she is a mountain guide and runs a tour company BluEmu. She is an International Mountain Leader (UIMLA) and a tour leader. She specializes in leading treks and expeditions to the remote mountain ranges of Asia.

With her clients she climbs such mountains as Elbrus (5642m) in Caucasus and Lenin Peak (7134m) in Pamir. Aleksandra also works as a speaker, making presentations from her expeditions as well as motivation speeches and workshops for festivals, local culture centres, schools, companies ets. She has already made several hundreds of presentations, each of them for the audience of several dozens to several thousands of listeners. In sports she represents Skimountaineering Club "Kandahar". She has been awarded by several Polish sports awards. In 2011 she received Andrzej Zawada Award for the project of first female winter ascent on Noshaq (7492m). The expedition will be organized at the beginning of 2014. In summer 2011 she has summitedher first eightthousander - Gasherbrum II (8035m).

In 2010 she has made the first Polish female ascent on one of the most dangerous mountains of the world - Pobedy Peak (7439m). As a first Polish woman she summited all 5 seventhousanders of the former USSR (Pobedy Peak, Khan Tengri, Somoni Peak - former Communism Peak, Korzhenevskaya Peak, Avicenna Peak - former Lenin Peak), obtaining the prestigious Snow Leopard title. In 2013 she was a leader of the big international expedition on Nanga Parbat (8125m), which was tragically interrupted by the terrorist attack.

In 2010 as a first woman she has finished the Elbrus Race competition on the longest Extreme distance, setting up the first womens record: 5h04. For many years she has practised skimountaineering, in which her greatest achievement in the Poland Championship and the Polish Cup. She has also participated and succeeded inadventure races, bike marathons and a wide range of running competitions. She documents her expeditions in photography. Her photos have been presented on several exhibitions in Poland.

The most important mountaineering and sports achievements:

Before you hit the road - the sponsor wanted!

Gathering finance, equipment, information about the expedition, visas, permits, transport, communication ... Everything is important before the journey of our life. Just remem...

One of the simplest and the most popular form of physical activity all over the world is jogging. However, if you do not like to run - you can choose an endurance march. This ...

From Vibram to Vibram FiveFingers

For more than 75 years Vibram has maintained its role of world leader in marketing and producing high-performance rubber soles, destined for outdoor, work, free time, fashion,...