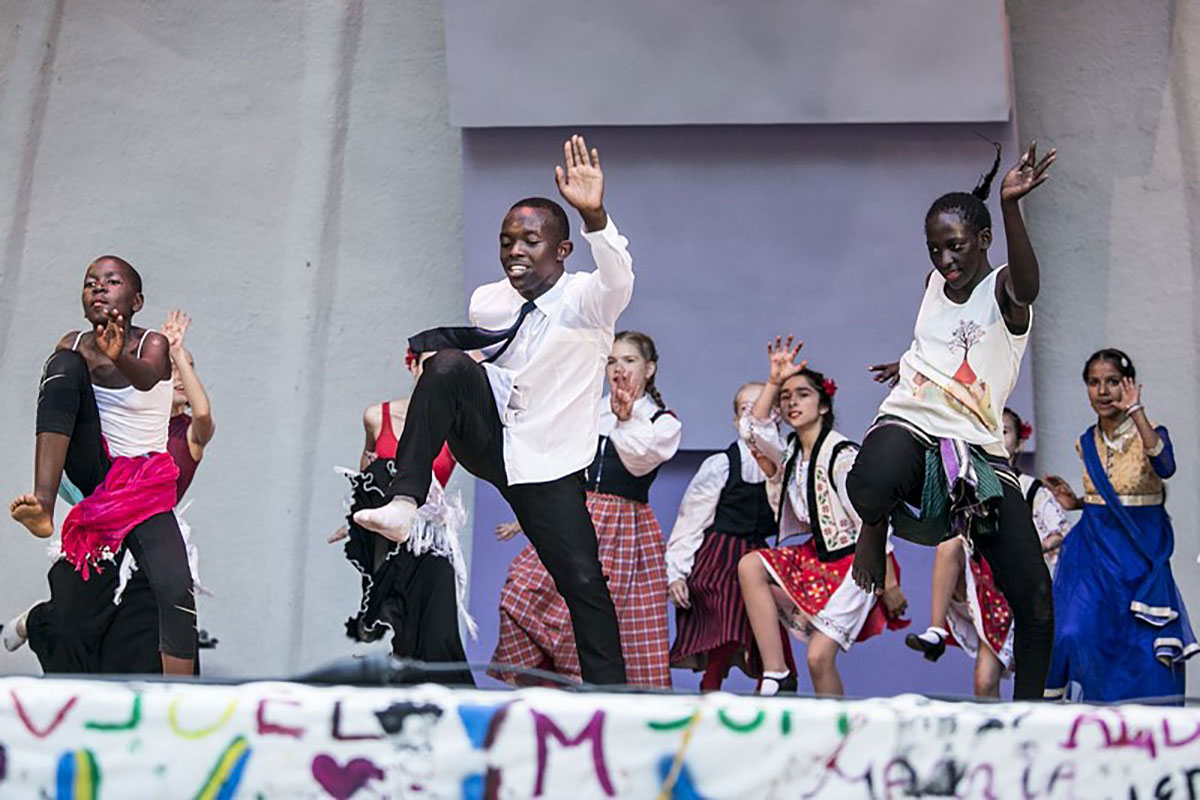 They create Brave Kids – an unusual project of the unusual children

Coordinators, instructors, volunteers and host families – these are people without whom the Brave Kid program would not be possible. Magda, Ilona, Iza, Creo and Roman – are from different countries and of different professions, but they share one passion and huge heart. Thanks to that the child artists from all over the world may experience an adventure of a lifetime in Poland.

Brave Kids is a program which lets meeting of the child artistic groups from all over the world (including 17 countries and 5 continents) and share experiences. Thanks to that the young artists from different countries, cultures, environments, sometimes with difficult life stories – can confront their worlds during meetings, workshops, picnics and artistic performances taking place in different cities in Poland. This year Brave Kids will take place also in Slovakia and Georgia. The children will learn, gain new skills and make friends together. However in order to make it happen, it is necessary to be engaged and passionate while being a person organizing this event.

Bringing joy into their lives

One of them is Magdalena Sawicka who does not only host the Brave Kids children in her house, but is also an initiator and organizer of the Wałbrzych edition of the program and was a coordinator of the host families in Wrocław. She has been connected to Brave Kids since 2012. Currently she conducts classes and trainings concerning multiculturalism and cooperates with the Culture Centre in Wałbrzych. – In 2011, for the first time I saw the Brave Kids poster and a year later I hosted three girls from Tanzania – says Magdalena Sawicka – They were special kids. They brought a lot of joy into our lives. It was wonderful to watch how they manage in our reality. We were learning their language and they – ours. After one of their shows I have seen my mum dancing in the street for the first time in my life.

As the organizer of the edition in Wałbrzych she underlines that the most important for her in Brave Kids is the joy of the children, breaking barriers and a visible change, both in young artists and the host families or volunteers. That is why every year people are encouraged to participate in the project by the families from Wałbrzych and the whole region.

She plays, sings and lives with Brave Kids

An person incredibly engaged in Brave Kids project is also Ilona Krawczyk. On a daily basis she is a singing actress who can be seen on the stage of the Song of the Goat Theatre or the Capitol Theatre. She implements the acting – singing – musical projects working on her doctorate project on the vocal training at the same time. This year, for the fourth time she will conduct trainings with young artists who will come to Wałbrzych – It is a specific role. Here I am not only an instructor, but also the guard, mediator, nurse and a company and supporter of the children in the process of integration and learning their cultures. – says Ilona Krawczyk. – We really want them to notice that they are the age-mates with similar interests, despite their differences. And what is different between them enriches their art.

The Wroclavian actress underlines that she feels as she receives from children taking part in the competition more than she gives. In the project she admires noticing the cultural richness, possibility of making friends with extremely interesting people and an amazing feeling of belonging with other children, leaders and host families.

Helps and has fun for four years

Every year also many volunteers share their hearts with Brave Kids. One of them is Iza Wołyniak. Until now she took part in four editions of the program in Krośnice, Wrocław and Oborniki Śląskie. Her tasks included, e.g. spending time with children and playing with them.

- I study pedagogy and I have always liked children what influenced my interest in this project – says Iza Wołyniak – Meeting and working with children taking part in the Brave Kids program is especially interesting, also because they come from different cultures and environments. It is wonderful to see that, despite difficulties that they experienced in their short lives, they can learn and play enthusiastically. What Iza enjoys mostly in Brave Kids are the friendships that are made during the kids’ visit to Poland which can survive also after their visit.

Famous Brazilian actor who fell in love with Brave Kids

A kind spirit of Brave Kids is also Creo Kellab – an educated actor and dance lover. Currently he stars in the most popular Brazilian series. He lives and works in Rio de Janeiro. To Brave Kids he came twice as a leader/guardian of a group of children. This year he is going to join the art instructors of Brave Kids. – He is a person full of good energy that he shares with the children living in difficult and dangerous conditions of the Rio favela – says Justyna Warecka, the executive producer of  Brave Kids. – He cares about better future for those children sharing his passion with them and he wishes that thanks to their commitment in art activities they could have beautiful and happy childhood despite many difficulties.

Creo spends a lot of time in Wałbrzych where, as well as in Koszyce, he conducts the art trainings with children and teenagers. This year, Creo Kellab as an art instructor will conduct the training Brave Kids in Wałbrzych and Oborniki Śląskie.

A person who also influenced Brave Kids is Roman Sorger from Slovakia. He came to Poland for the first time three years ago along with a group of talented kids from the Haliganda Theatre conducted by him. He enjoyed this event so much that since last year Brave Kids has taken place also in Koszyce in Slovakia as part of his initiative. Also this year thanks to him the young artists from few countries will take part in the trainings organized by him. Roman and his organization Haliganda are the BK organizers in Koszyce – The Roman’s love for the Polish theatre and special commitment in the children’s development made Brave Kids cross the borders and be a constant visitor in Slovakia – says Justyna Warecka.

Triggering creativity in children is a real challenge. Unfortunately, in the era of toys that do not require imagination, it becomes increasingly difficult to educate wisely t...

The best sunglasses for kids!

The proper hat, good bidon, comfortable sandals and sunglasses of good quality is the basic set of a small tourist during holidays. Each of those things is a guarantee of heal...

In a month the talented kids from all over the world will come to Poland as part of the project Brave Kids 2017. Kenya, Mexico, Morocco, India, the USA – these are only some o...