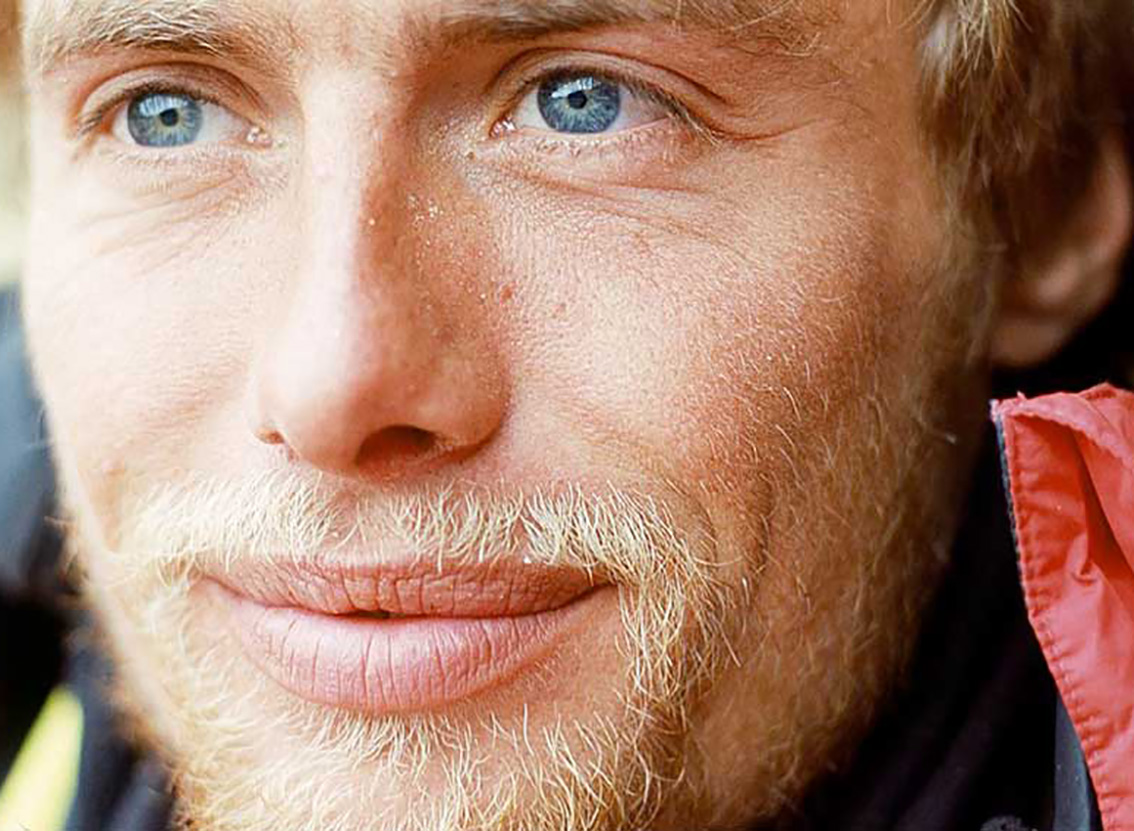 Leo's name is synonymous with adventure climbing; he has consistently pushed at the limits of this game and in the process has carved out a media profile which has seen him appear on Top Gear and be pitched as one of Britains top ten adventurers by The Telegraph. But dont get the wrong idea, all this media attention is well deserved – Leo is without doubt the real deal.

He grew up in the Lakes and started climbing in 1990 at the age of 10. Just 6 months later he and his Dad acquired the taste for adventure climbing with the youngest ascent of the famous Scottish sea stack, the Old Man of Hoy. By the time Leo was 15 he had become the British Junior Indoor Climbing Champion. In 1997 he moved to North Wales and started to make a name for himself, making audacious ascents of bold climbs such as Masters Wall E7 6b on Clogwyn Dur Arddu. In 1998, still only aged 18, Leo landed in Yosemite with the similarly youthful Patch Hammond and made a landmark, virtual on-sight repeat of the Huber brothers, El Nino 5.13c, just days after they had made the first free ascent. This remains one of the finest ever ascents of what is widely regarded to be the most influential cliff in the world.

Back in North Wales he made the first ascents of Rare Lichen and Trauma both E9 7a, in 1998 the hardest grade of the day. However, his true desires lay on the big walls and in 2001 he proved this again by completing the first free ascent of The West Face of the Leaning Tower 5.13a in Yosemite. In 2002 a big fall on Cerro Torre in Patagonia put Leo out of action for a year with a badly broken ankle. The story of the fall became the subject of a BBC documentary and opened him up to a whole host of TV and film opportunities. He returned to Leo Houlding BiographiesPatagonia in 2005 and with Kevin Thaw made the first free ascent of the huge 1400m north pillar of Fitzroy.

In 2004 Leo began BASE jumping and has also been a pioneer of para-alpinism, a climbing method he demonstrated on Top Gear when he and Tim Emmett climbed to the top of the Verdon Gorge then base jumped back to the bottom of the route. In 2007 he summited Everest during the filming of the multi million pound movie The Widest Dream. Released in 2010 to much acclaim the film retraces the last steps of Mallory and Irvines fateful expedition to Everest in 1924. Taking the role of Sandy Irvine, Leo climbed in period equipment up to 7600m where they undertook the highest drama shoot in history.

Later that year Leo hosted his own Virgin One TV series, Take me to Edge. He took 5 youngsters on a global journey of discovery intended to change their perspective on life by partaking in tribal rites of passage and adventurous challenges. In 2008 Leo was back on the big walls this time breaking speed records. He made the first team free ascent of both the North West Face of Half Dome and The Freerider on El Cap in a single day. Over a mile of hard climbing it is a feat that most strong teams would require more than a week to achieve.The following year saw a free attempt of the mighty North West Face of Mount Asgard on Baffin Island, documented in Alastair Lees blockbuster movie "The Asgard Project". The film went onto win 20 awards making it one of the most highly
acclaimed climbing films of all time.

In 2010 he topped it all by completing his long term Yosemite project. The Prophet E9 7a/5.13d R on El Capitan is a truly impressive route one that Leo had tried on a number of occasions since his first attempt in 2001. Success on it is a lifetime achievement and a real highpoint in an already remarkable climbing career."The A1 Beauty crux of the Prophet is the most perfect pitch I could ever have imagined. Such an aesthetic line in an unequalled position, so desperately thin and painfully close to my limit. Succeeding on the first ascent is a dream come true. If I never climb anything harder I will not be disappointed."

Leo continues to work closely with his main sponsor of more than 13 years Berghaus. He is an ambassador for the British Mountaineering Council, representative for Cumbria Tourism, Trustee of Doug Scottss Charity Community Action Nepal, member of the prestigious Cordon Rouge explorers club and patron of the UKs biggest mountain film festival - Kendal.The most widely recognized and articulate climber of his generation he has lectured to tens of thousands of people in more than 20 countries around the world including being asked to speak to the British Prime Minister at 10 Downing Street in 2008. He has worked for multinational companies such as Audi, Ford and Nokia as well as specialist brands including DMM, Five-Ten and Adidas eyewear.

He continues to entertain and inspire outdoor enthusiasts and corporate audiences around the globe with his tales of Leadership, Risk management and 21st century exploration.

Anita - sexy underwear on every occasion

84 meters - a distance covered by our bust during 1-kilometer run. Good sports underwear can significantly limit the movement and help to keep the shape and firmness of breast...