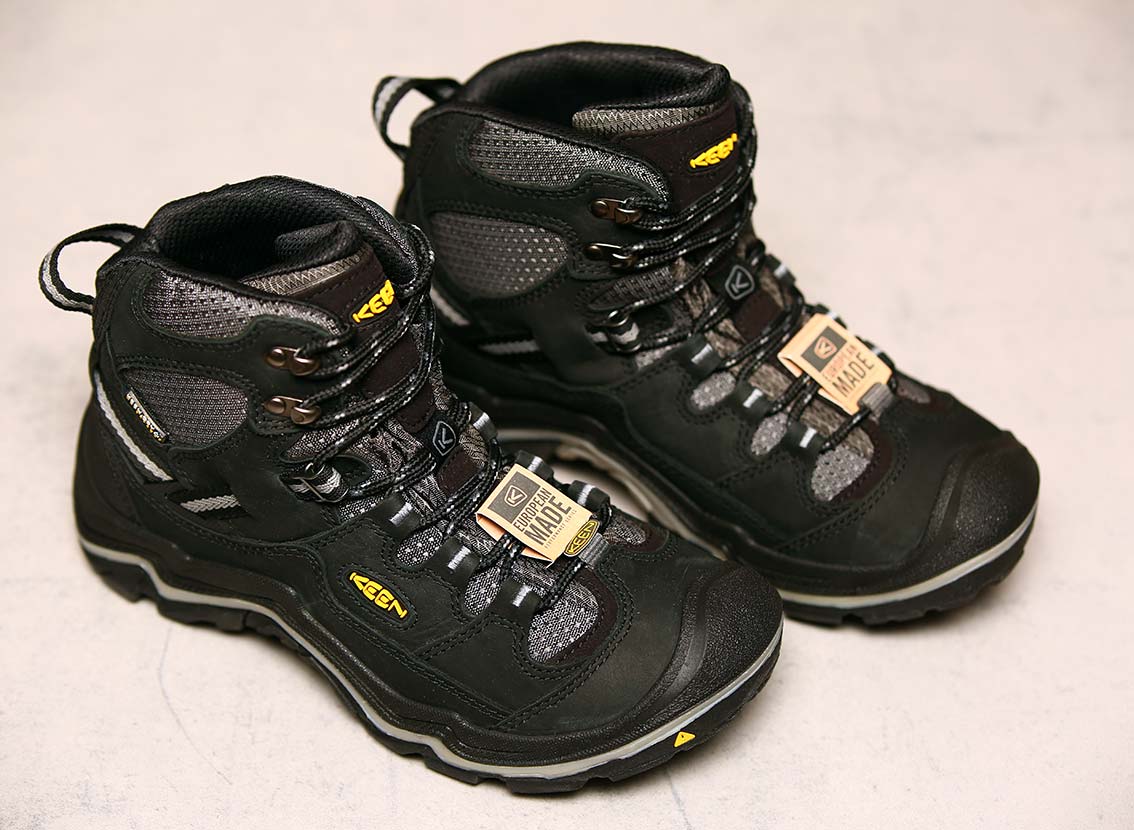 KEEN is one of the most environmentally responsible outdoor companies. By moving some of their production to Europe, it lowers the carbon footprint of its products, while giving consumers the choice of shoes origin. Durand Mid model therefore has "European passport" and it is certainly a good choice for anyone looking for a responsible shoe that will turn out to be useful in any weather conditions.

I have had the opportunity to test Mid Durand shoes in the winter, that rarely seemed to be winter. But when it has come – it used to be snowy and spectacular. Apart from the days of real winter, I have tested the shoes in truly spring conditions, where temperatures were reaching up to 20 degrees Celsius. Paradoxically, this kind of weather was favourable, because it allowed me to test the shoes in a variety of conditions. For me, it was not a surprise that Keen passed with flying colours.

Durand shoes can be used in 4 seasons, provided that we do not take hiking in the high mountains in harsh winter conditions into consideration. These shoes are made of polyurethane foam with two-part soil, they are very comfortable and durable. As their producer explained: "Polyurethane foam extends the operating parameters, maintains its properties of shock absorbing, no matter how long distances you will travel."

These shoes have a waterproof and breathable membrane- KEEN.DRY and "Toe Protection” patent typical for this brand, which is the sole with an integrated part protecting fingers. It is produced by coating the tip of the shoe with an additional protective layer of rubber, which is an extension of the sole on the toe. On the other hand, KEEN.DRY membrane, thanks to its molecular structure, is impermeable to water from the outside while allowing the moisture from inside the shoe to get out. Thanks to it, a foot, according to the manufacturer, still remains dry.

Another advantage of Durand model are METATOMICAL FOOTBED DESIGN inserts, providing comfort. The inserts are anatomical and they automatically adjust to the shape of the foot. The inserts have a ventilation system, and in the winter models – there is an extra thermal layer. The insert is removable, so that it can be quickly dried. But as it turned out - I did not need to.

The first observation after removing the shoes from the box - their double seams, which are a guarantee of the durability of shoes exposed to heavy use. The second one - the shoes have a tape under a heel, which helps to put the shoes on. As a matter of fact, for me the shoes above the ankle with no such a solution can no longer exist. The tape significantly accelerates putting the shoes on, and it is also useful for hiking, when we want to fasten our shoes to a backpack while ascending or descending. The tab is connected to shoe upper between the fourth and fifth loop on the shoestring. As a result, even walking in the puddles and streams will not result in water entering the shoe (but about it later!).

For me, the biggest advantage of these shoes is their construction. I do not like shoes with a narrow front part. Perhaps it is because I have got used to urban shoes designed for skateboarding, which are extremely wide? I do realize that an outdoor shoe has completely different tasks, but the comfort of the foot is here, however, essential. I do not feel comfortable in the shoes with very narrow fingers area, especially in situations when the foot is constantly working, because of changes in terrain shape and you have once to go up and then down. In such situations, my feet very quickly get tired in the shoes with a narrow front. Yet, KEEN are quite different from the majority of outdoor shoes I have already known. Thanks to this, they win in my private ranking with all shoes that I have worn so far - both in the mountains and during the winter in the city.
I started testing my KEEN from impregnating them with Grangers G-Max Universal Footwear Proofer product, with blue-sign. After drying, I could start testing. It was not easy, because during the tests I had a lot of activities, associated mainly with long and distant journeys - both urban and mountain.

The first test for Durand was a large fall of wet snow in the city. When I left home - there was a beautiful spring weather. That is why I didn’t take winter socks with me. Over the next few days the temperature was slowly dropping below zero and rising. The snow melted during the day, at night everything was freezing, forming an ice, slippery layer on the pavements. How did Keen do in such circumstances? Very well! First of all – my feet were not cold, in spite of the summer short bamboo socks. The shoes had a good grip, even in the morning when the pavements in the city were covered with a thin, treacherous layer of ice. Thirdly - in spite of doing things all day round and running in the wet, melting snow – they did not get soaked not even once.

I must admit that I was mainly afraid of my feet, when during all-the-day-long photo shoot in the studio without taking the shoes off. The temperature around 25 degrees Celsius in the room is not in fact the most comfortable for the winter shoes. However, it has turned out that the feet were not sweaty or hot. This is a significant advantage of these shoes. My previous outdoor shoes above the ankle did not provide a such comfort and my feet are very tired during all-day wearing in such conditions.

Although KEEN Durand have turned out to be very useful in winter conditions, even during short trips in the lower parts of the Tatra mountains, still I would not choose them for hiking in high mountains in winter. The shoes are very comfortable, but also quite soft (the sole as well as the upper). Theoretically, you can wear strap or basket crampons, but to me this solution seems to be risky and not quite comfortable. And in the high mountains, the risks and lack of convenience are not really advisable in winter! Another issue will be the summer expedition in the high mountains, during which Durand should do well.
I would not be myself if I did not try to put the tested shoes in a mountain stream. Even after passing a stream with my feet immersed in water up to ankles, my shoes were neither soaked nor I felt discomfort associated with the cold. Walking on snow was easy in these shoes - both in the sub-zero temperatures as well as during thaws, in the sticky, wet slush. Also, in such conditions, the shoes neither got wet nor have lost their grip to the ground.

After a winter snow, the next week has brought spring temperatures and some drenching rainfalls. In these conditions Durand were also very good. Despite several hours’ marches in the rain they did not get wet, and several times they also saved my ankle against twisting on slippery stairs. It is worth mentioning about two advantages of these shoes. The first one is a sole, which does have a good grip even on a very slippery ground. The second one, equally important is a well-thought-out shoestring system. The fourth loop is a metal slot connected with a strip dragged to the back of the shoe on top of the upper. During lacing, this element is tightened, so that the shoe fits the leg even better and it holds the ankle tight. This is undoubtedly an excellent solution for all those who have a tendency of twisting ankles, even on a straight road...

What is important - a foot in Durand shoe is not overheated even at temperatures above 15 and even 25 degrees, and the shoe even after intensive use does not accumulate odours. As far as the weight of the shoes is concerned - they are not the lightest on the market, but they are far lighter than the models of shoes above the ankle, which I have had the opportunity to wear so far. After several weeks of testing, the Durands still look like as if they have been taken out of the box. Toe Protector is significant here, it prevents from drawing up the noses of shoes while walking in a rocky terrain.

In summary - KEEN Durand Mid shoes are an excellent solution for those looking for a multi-seasonal footwear that can cope with changing weather conditions and difficult terrain, as well as can be useful in urban conditions. They are comfortable, they can hold the foot and ankle well, they protect toes from injuries, but at the same time other trips do not leave any traces of use on them. Besides, they are manufactured in Europe! 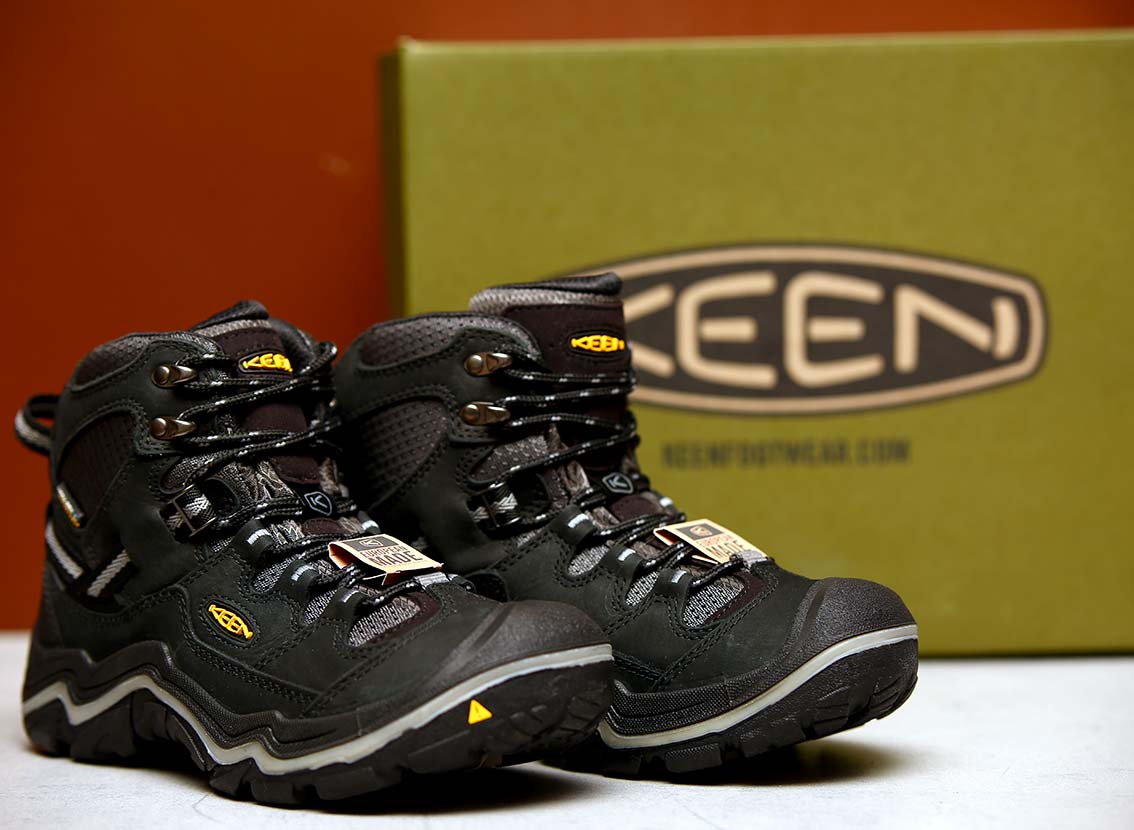 Recycled down - a new ethical trend?

Recycled down is a new trend in outdoor clothing. This year, two global brands have decided to add to their offer jackets filled with feathers, recycled from old duvets and pi...