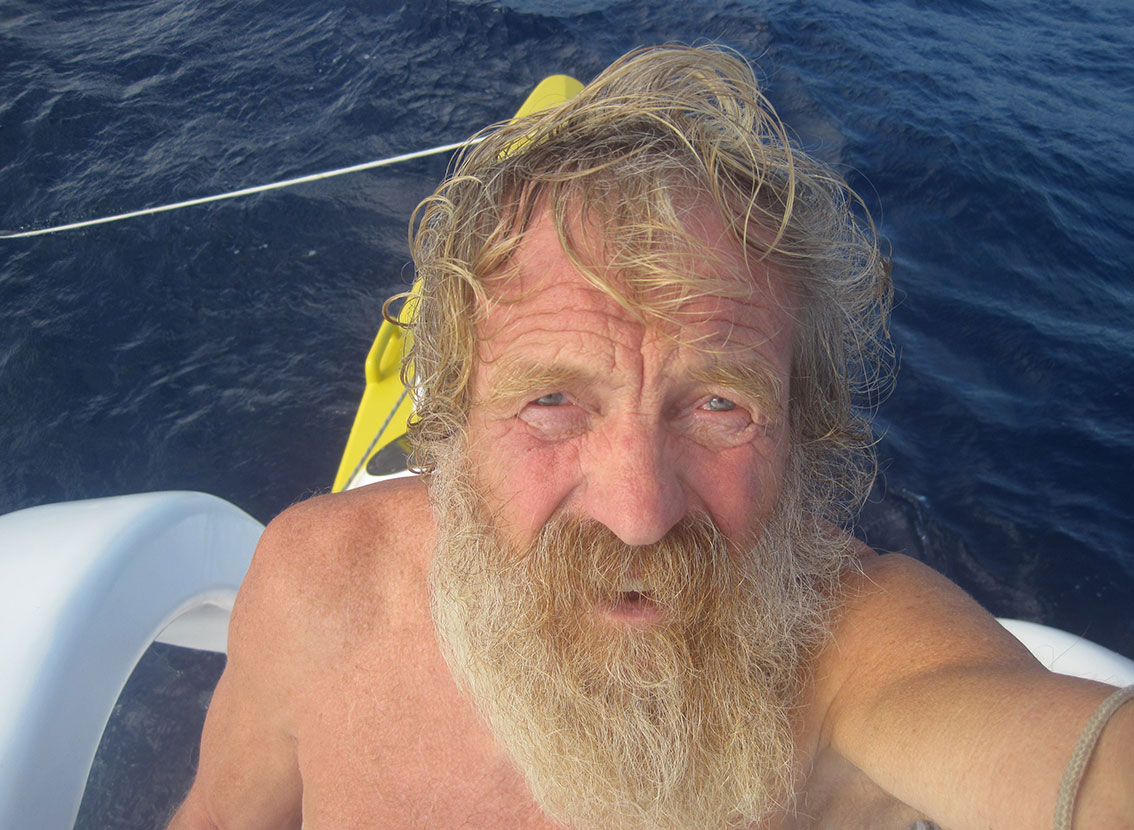 Aleksander Doba – Traveler of the Year 2015

Aleksander Doba was born on 9th of September, 1946 (zodiacal sign-Virgo). Until 1975 he lived in Swarzędz near Poznań. He graduated from Poznań University of Technology, and since 1975 he has lived in Police. He is a pensioner of Police Chemical Plant. He has a wife Gabriela and sons Bartłomiej and Czesław. He is the grandfather of two granddaughters: Olga and Agata.

Olek has always spent his free time actively. He was a glider pilot (250 hours of flying, the second glider training class - a silver gliding badge with a diamond), he was a paratrooper (14 jumps - the third class of parachute training), a cyclist (a gold badge of cycling tourism), a sailor and yacht helmsman (an extended patent for sea voyages). Quite late he has become a canoeist- in his early thirties, but he has immediately fallen in love with canoeing.He has started his kayak tourism in the "Alchemik" Canoe Club in Police and Canoe Tourism Academic Club "Pluskon" in Szczecin. Pretty soon he has received all kayaking badges of all grades of Polish organizations and the highest international organization-ICF (ICF gold - one of the few in Poland). The I- degree leader ofPTTKCanoe Tourism, Federal degree Instructor ofPZK Canoe Tourism, Physical Recreation Instructor specializing in canoeing. And what he appreciates the most is winning the title of Academic Polish Champion in white-water kayaking in 2003, which he defended a year later. According to him, his greatest success in this area is winning the title of Team Academic Polish Champion in white-water kayaking in 2000 and 2003, in a teamconsisting of himself and his sons ("ABC DOBA"). Till now, he haskayaked over 93 thousand km.

The most important kayaking trips of Aleksander Doba:
1-13.04.1989–he swam Poland diagonally from Przemyśl to Świnoujście in 13 days - a route of 1189 km.
1989 –he broke a record f a distance, swam in a kayak during one calendar year: 5125 km, of which 5000 km were new trails, swam by him for the first time in his life. It should be noted that he accomplished it using only weekends and normal, 26-day leave. In 1989, he spent 108 days on the water.
1991 –as the first canoeist after World War II, he sailed on the Nysa Łużycka and the Oder rivers, along the western border to the sea, from the point of contact of three countries: Poland, Germany and Czechoslovakia.
1991 - as the first Polish canoeist he swam along the Polish maritime border, and as the third vessel after the World War II he sailed through the Strait of Baltiysk near Baltiysk and swam to Elbląg, and then to Gdynia.
As the first canoeist he swam all along the Vistula river from its beginning, that is, from the mouth of the Białaand the Czarna Wisełka rivers to a reservoir (circumnavigated it), to the mouth to the Baltic sea. He swam all the mouth of the Vistula river to the sea: Martwa, Śmiała, Przekop, the Strait of Baltiysk.
21.07.1998 - 11.09.1998 – he swam along rivers and canals, the North Sea and the Baltic Sea in 55 days a route of 2719 km from Police, through Germany, around Denmark back to Police.
21.06.1999 - 09.09.1999 –he all alone circumnavigated the Baltic Sea "From Police to Police" in 80 days, without calling at bays. The covered distance is 4227 km.
26.06.2000 - 10.06.2000–he sailed by himself a route from Police to Narvik, beyond the Northern Arctic Circle. During 101 days, he travelled 5369 km, visiting various tourist attractions of Norway with a guide book on the way.
2004–He made his first attempt to cross the Atlantic Ocean. He started with Paweł Napierała within the confines of KAYLANTIC Expedition from Ghana, with the intention to swim to Brazil. After two days, both canoeists were sent back to the Ghana coast because of sea currents, and a breaker destroyed the equipment of the kayaks.
7-12.07.200 – members of Szczecin Canoe Group K2: Aleksander Doba, Peter Owczarski and Jerzy Świtek made an attempt to cross the English Channel on kayaks from Cap Gris-Nez to Folkestone. It was thwarted by a strong storm.
August 2008–he took part in the expedition "Altai - a full solar eclipse – the Baikal Lake. Summer 2008". He took a tarpaulin folding canoe in order to circumnavigate the Baikal Lake. Unfortunately, after swimming a quarter of the route, the weather made impossible the completion of the expedition. He left his canoe in Ulan Ude and returned to Poland.
2009 –a solitary circumnavigation of the Lake Baikal within 41 days. He swam 1954 km along a coastline in a kayak, left in Ulan-Ude a year earlier, at Vladimirs place whom he met on the shores of the Lake. After sailing around the Baikal Lake, and he then swam along the Angara river to Irkutsk, where he used Trans-Siberian Railroad to return to Poland.
26.10.2010 - 02.02.2011 – a solitary voyage across the Atlantic Ocean. This Transatlantic canoe expedition could come into effect thanks to a special canoe, made by Andrzej Armiński in his shipyard and three young engineers: Rafał Głodka, Michał Klimek and Radosław Zygmunt. During the expedition, he swam only on a canoe using a paddle, without a sail or any help from the outside, after 99 days he ended up in the village Acarau in Brazil. The kayaker swam 5394 km. Olek, as the first canoeist in the world, crossed the Atlantic from continent to continent, only by the strength of his muscles.
23.05.2011 – 26.06.2011– a trip along the Amazon River from Yurimaguas in Peru on the Huallanga river, through the Maranon and Amazon to Brazil, with the intention to swim to its mouth. During the expedition he was attacked by bandits twice and robbed of almost everything. He decided to discontinue the expedition in Manaus, Brazil.
05.10.2013 - start of the second Transatlantic Canoe Expedition from Lisbon, with the intention to cross the Atlantic Ocean from the European continent to North America, using only physical strength and without any help from outside. After more than 40 days of a struggle with the opposing winds in the Bermuda Triangle area and a broken rudder, he decided to swim to Bermuda, he made there on February 23-rd 2014. He is the first canoeist, who sailed to Bermuda from Europe. Thus he set a new record of a human in a kayak at sea (142 days) and the record of the length of kayaking (about 5,300 nautical miles = 9816 km). After nearly a month stay in Bermuda he spent next 25 days and reached Port Canaveral and using internal waterways New Smyrna Beach. Olek got out an American land on April 19-th2014, after 167 days of his stay in the Atlantic. He sailed total of 6710 nautical miles = 12 427 km.

The most important awards and distinctions:
1999– "Conrady–Marine Individuality" Award, awarded by the Baltic Brotherhood of Sailors from Gdansk, for the circumnavigation of Baltic Sea in a canoe.
2000 –Kolos 2000 award, in the category - Achievement of the Year for the expedition from Police to Narvik.
2000 – "Traveler of the Year" award given by Podróże magazine in the category of "Europe" for the canoe trip to Narvik.
2009–Kolos 2009 award, in the category -Achievement of the Year, for a single canoe circumnavigation of the Lake Baikal, as the first Pole.
2010 –2010Golden Foot Award, awarded by Internet users for the greatest travel achievement of the year- a canoe circumnavigation of the Lake Baikal. He wasthe first in the Water category and the general category, before, among others, Martyna Wojciechowska, nominated for climbing the Seven Summits.
2012– Super Kolos 2011 for " a lifetime achievement in canoeing and consistent pursuit of ever more ambitious aims".
2012 –Szczupak 2011 Award, in Gazeta Wyborcza plebiscite in Szczecin, for carrying out bold dreams.
2012 – Master Mariner Diploma Honoris Causa No. 6, awarded by Master Mariner Club in Szczecin for successes in a lonely canoe sailing in difficult conditions (including a cruise around Denmark, around the Baltic Sea and the North Arctic Circle and a solitary canoe crossing of the Atlantic Ocean from Senegal to Brazil).
2012– a honourable title of "Tony Halik Traveler" at2012Travel Festival in Bydgoszcz.
2012 - Marshal gave Aleksander Doba, on behalf of the Westpomeranian Regional Assembly, Gold West Pomeranian Griffin Honorary badge.
21.09.2012 – unveiling a memorial, about Aleksander Doba patronage of Primary School in Iwięcino, Iwięcino 7, 76-004 Sianów.
19.04.2014– establishment by Adam Barringer the mayor of New Smyrna Beach a new holiday in the city. April 19-th is the "day of Aleksander Dobas arrival" which was proclaimed in a special decree.
07.08.2014– at Salt Lake City (Utah, USA) during the final gala, he received the statue for the winner of the competition Canoe & Kayak Magazine in the category of "Expedition of the Year 2014".
25.05.2015– Warsaw, 2014Grand Prix Traveler Award.
11.06.2015 - Washington, he received the title Traveler of the Year 2015.

Oleks favourite quotes:
"Get up early, youll have a longer day" – Aleksander Dobas father.
"Life is too short to drink a cheap wine".
"It is better to live one day as a tiger than 100 days as a sheep".